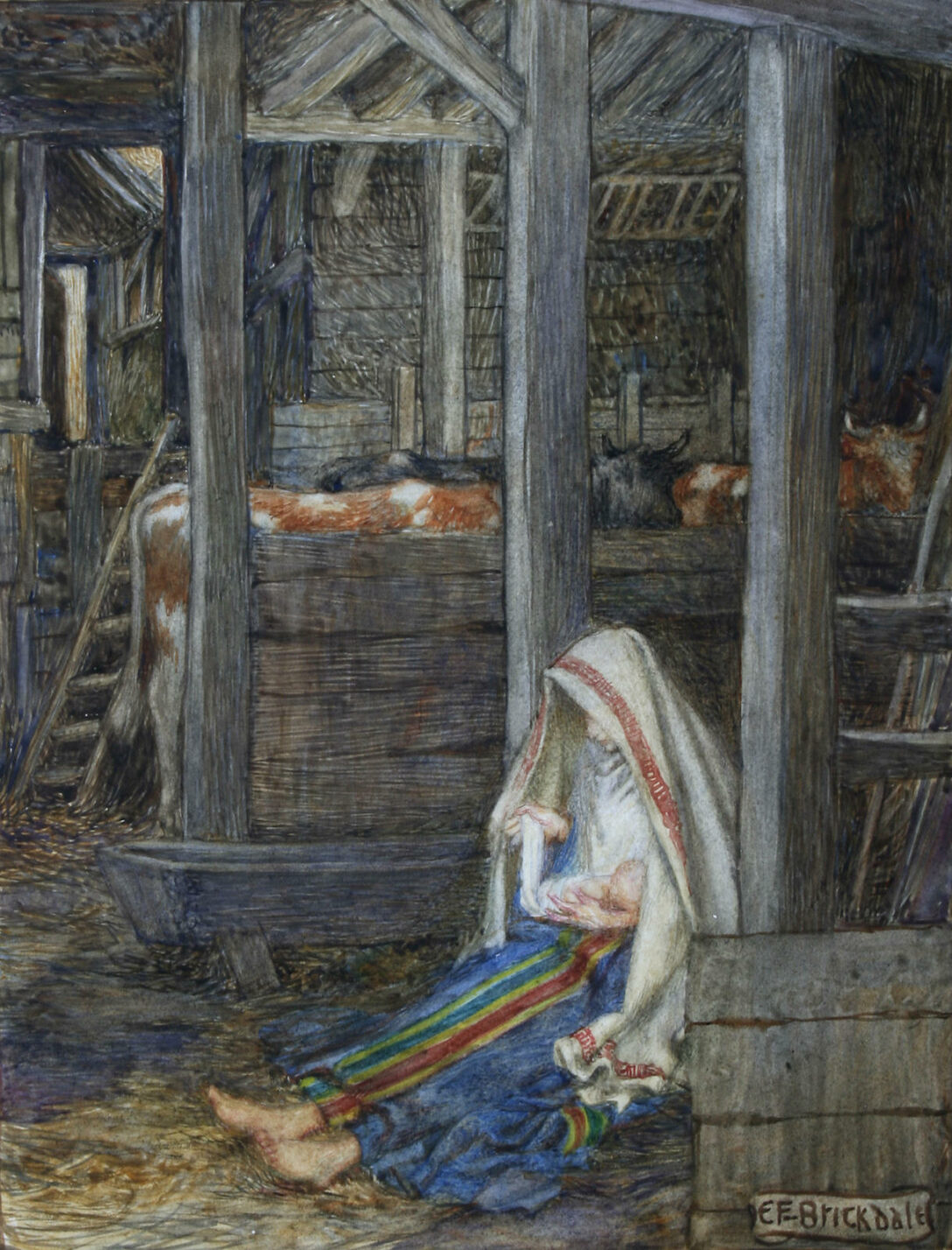 The Birth of Jesus

Towards the end of our passage from St Luke today we have that phrase that I’m sure is something of an understatement, that Mary considered what she had heard about Jesus and was ‘pondering them in her heart.’ I’m sure she had an awful lot to ponder. How much did she manage to make sense of? Much of her life must have been spent wondering what to make of all the events and prophecies concerning Jesus.
Much of what she hears about her son have her worrying of possible dangers that might befall him. Right from the start things don’t seem to be working out how she would have planned them. A journey of a number of days when nine months pregnant, and then, rather than have the child at home, she gave birth in a stranger’s stable. Then a raggle-taggle crowd of shepherds turn up with their excited chatter.
Yet, overall Mary may well have had the sense that whatever strange things were happening, God was in charge.

Gift:  Ask for what you desire.  You may wish to share in the wonder and joy of the birth of Jesus.

Setting:  Imagine you are a character in this story, on the journey with Mary and Joseph from Nazareth to Bethlehem. Were they alone or in a group? Imagine the search for lodging, then staying in a stable.
The birth, and then the visit of the shepherds. How did the people feel?

Now in those days, a decree went out from Caesar Augustus that all the world should be enrolled.  This was the first enrolment made when Quirinius was governor of Syria.
All went to enrol themselves, everyone to his own city.  Joseph also went up from Galilee, out of the city of Nazareth, into Judea, to David’s city, which is called Bethlehem, because he was of the house and family of David;  to enrol himself with Mary, who was pledged to be married to him as wife, being pregnant.
While they were there, the day had come for her to give birth. She gave birth to her firstborn son. She wrapped him in bands of cloth, and laid him in a feeding trough, because there was no room for them in the inn.  There were shepherds in the same country staying in the field, and keeping watch by night over their flock.  Behold, an angel of the Lord stood by them, and the glory of the Lord shone around them, and they were terrified.  The angel said to them, “Don’t be afraid, for behold, I bring you good news of great joy which will be to all the people.  For there is born to you today, in David’s city, a Saviour, who is Christ the Lord.
This is the sign to you: you will find a baby wrapped in strips of cloth, lying in a feeding trough.”  Suddenly, there was with the angel a multitude of the heavenly army praising God, and saying,
“Glory to God in the highest,
on earth peace, good will toward men.”
When the angels went away from them into the sky, the shepherds said to one another, “Let’s go to Bethlehem, now, and see this thing that has happened, which the Lord has made known to us.”  They came with haste, and found both Mary and Joseph, and the baby was lying in the feeding trough.  When they saw it, they publicised widely the saying which was spoken to them about this child.  All who heard it wondered at the things which were spoken to them by the shepherds.  But Mary kept all these sayings, pondering them in her heart.  The shepherds returned, glorifying and praising God for all the things that they had heard and seen, just as it was told them.

Conversation: When you have finished imagining the scene and you have spent time in quiet contemplation, take a little time to talk to Jesus, Mary or Joseph as a friend about whatever comes to you. Imagine how they might reply.

Final Prayer: End with a formal prayer such as the Lord’s Prayer/Our Father or Hail Mary.

The Music: Tàladh ar Slànair, sung by ‘Arthur’. The original song has 29 verses and is sung on Christmas Eve on certain Scottish Isles.

The above link is to music on YouTube. We have no control over it
If it doesn’t work please let us know by sending us an email.