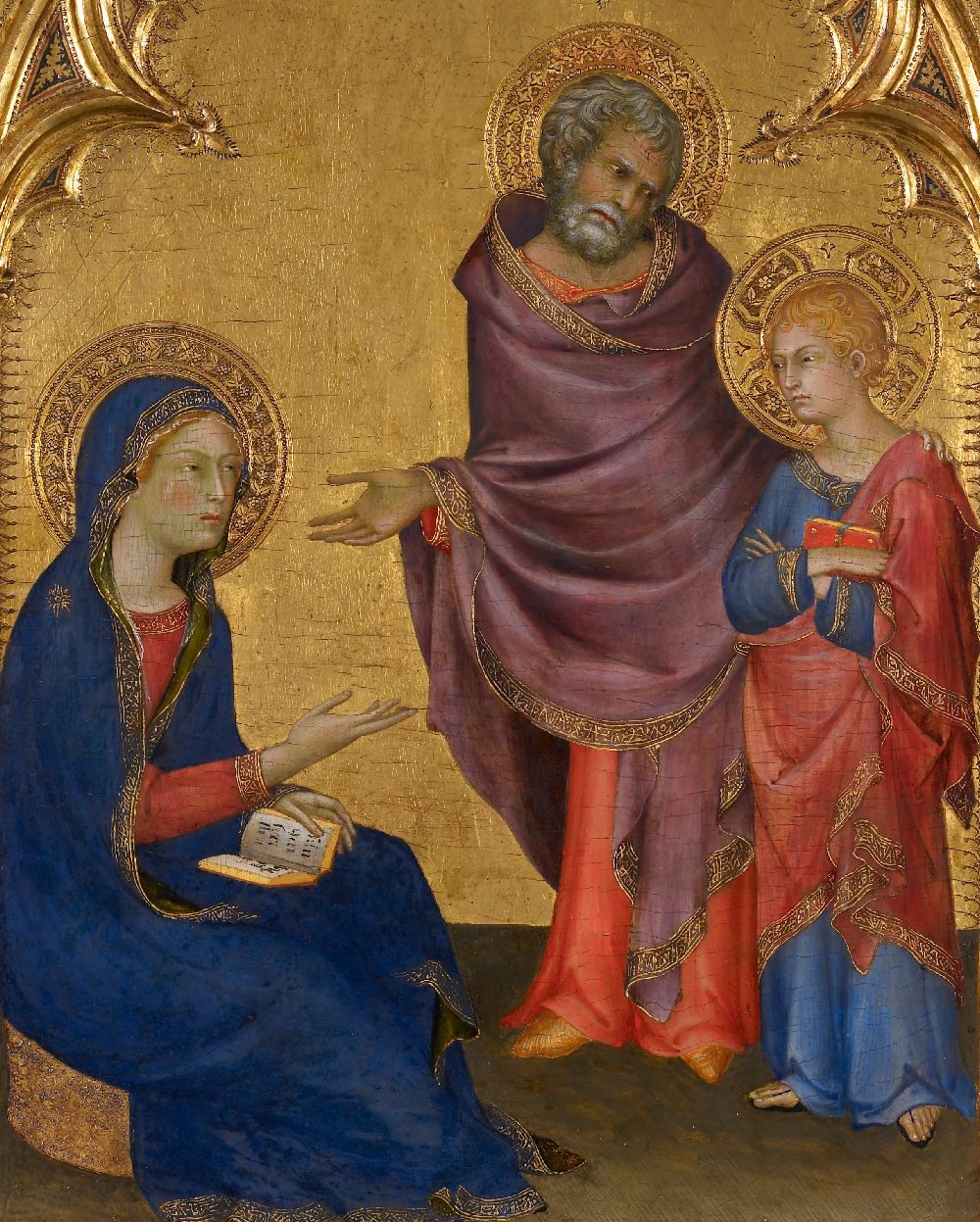 Finding of Jesus in the Temple by Simone Martini, 1342

Today’s story throws light on the life of the Holy Family. No travelling as a nuclear family for them; rather in a great caravan of people from Nazareth. The walk men together and the women walk together, and the children wandering between them. Such a large group that Mary and Joseph didn’t notice they hadn’t got their boy. Imagine the worry at having lost him, especially as it took three days to find him.
Pious Christians later developed this story to have Jesus teaching the learned men in the Temple, but much more likely the adolescent Jesus was learning from those who really knew their tradition. He obviously impressed them with his grasp and ability to understand the things of God.
Our picture today captures the moment when Mary begins to tell Jesus off for causing Joseph and herself so much worry.

Gift:  Ask for what you desire.  You may wish to share in the worry of Mary and Joseph at losing their son and their relief at finding him.

His parents went every year to Jerusalem at the feast of the Passover.
When he was twelve years old, they went up to Jerusalem according to the custom of the feast,  and when they had fulfilled the days, as they were returning, the boy Jesus stayed behind in Jerusalem.
Joseph and his mother didn’t know it, but supposing him to be in the company, they went a day’s journey, and they looked for him among their relatives and acquaintances.
When they didn’t find him, they returned to Jerusalem, looking for him.
After three days they found him in the temple, sitting in the middle of the teachers,
both listening to them, and asking them questions.
All who heard him were amazed at his understanding and his answers.
When they saw him, they were astonished, and his mother said to him,
“Son, why have you treated us this way?
Behold, your father and I were anxiously looking for you.”
He said to them, “Why were you looking for me?
Didn’t you know that I must be in my Father’s house?”
They didn’t understand the saying which he spoke to them.
And he went down with them, and came to Nazareth.
He was subject to them, and his mother kept all these sayings in her heart.
And Jesus increased in wisdom and stature, and in favour with God and men.

Conversation: When you have finished imagining the scene and you have spent time in quiet contemplation, take a little time to talk to Jesus, Mary or Joseph as a friend about whatever comes to you. Imagine how they might reply.

Final Prayer: End with a formal prayer such as the Lord’s Prayer/Our Father or Hail Mary.

The Music is Mary did you know, sung by Pentatonix

The above link is to music on YouTube. We have no control over it
If it doesn’t work please let us know by sending us an email.