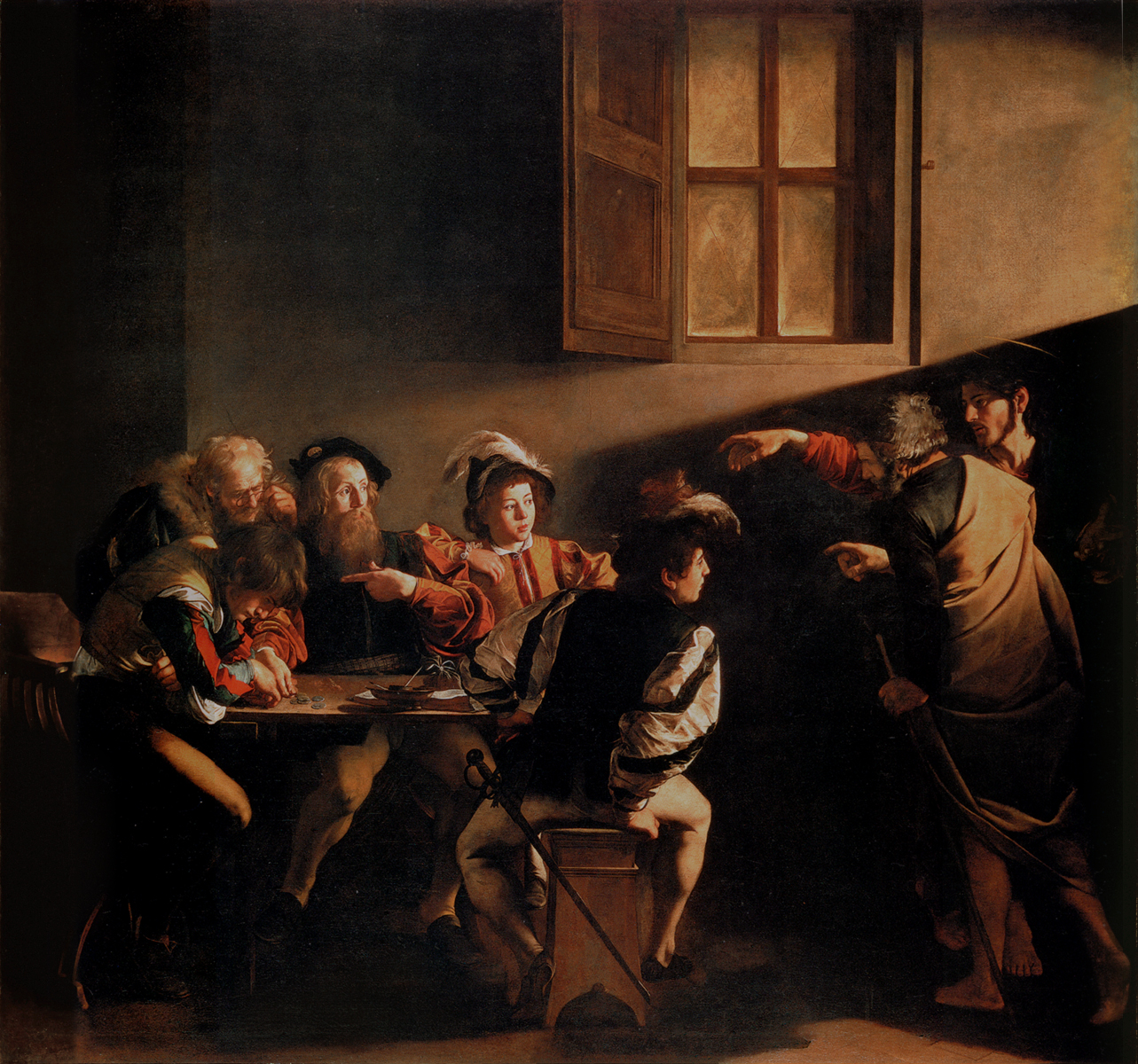 Today’s Picture: The Calling of Matthew by Caravaggio

The Teachings of Jesus: Open to all

Jesus chose colourful friends. His was not a life lived in black and white.
He was criticised for eating and drinking with tax collectors (collaborators with the Roman conquerors) and sinners.
Good Jews of his day followed the Law (Torah), kept themselves ritually clean,
and avoided being tainted by mixing with the unclean and sinners.
Jesus rejected much behaviour expected of pious Jews.
He touched the unclean, such as lepers and the dead.
He supported his disciples who technically broke the Sabbath when they ate ears of corn in a field and he enjoyed the company of sinners.
Whether he just enjoyed their company or whether he set out to convert them to a change of life is not always clear. He was certainly confident enough in himself not to be concerned about being drawn into a life of sin. There are a number of Gospel stories where the sinners, particularly those who had a good heart, were converted through meeting with Jesus.
Today’s reading is the call of Levi from Mark’s Gospel, who is usually taken to be the same person as Matthew the tax collector in the Gospel of Matthew.

Gift:  Ask for what you desire.  Suggestion: To know Jesus more clearly, love him more dearly, and follow him more nearly.

Setting: This passage is set by the sea of Galilee.  Imagine yourself as a character in this scene, a member of the crowd, a disciple or ‘a sinner’.

Then Jesus went out again beside the sea.
The whole crowd was coming to Him, and He taught them.
Then, moving on, He saw Levi the son of Alphaeus sitting at the tax office,
and He said to him, “Follow Me!” So he got up and followed Him.
While He was reclining at the table in Levi’s house, many tax collectors and sinners were also guests with Jesus and His disciples, because there were many who were following Him.
When the scribes of the Pharisees saw that He was eating with sinners and tax collectors, they asked His disciples,
“Why does He eat with tax collectors and sinners?” When Jesus heard this,
He told them, “Those who are well don’t need a doctor,
but the sick do need one.
I didn’t come to call the righteous, but sinners.”

Conversation: Talk to Jesus in your own words as a friend