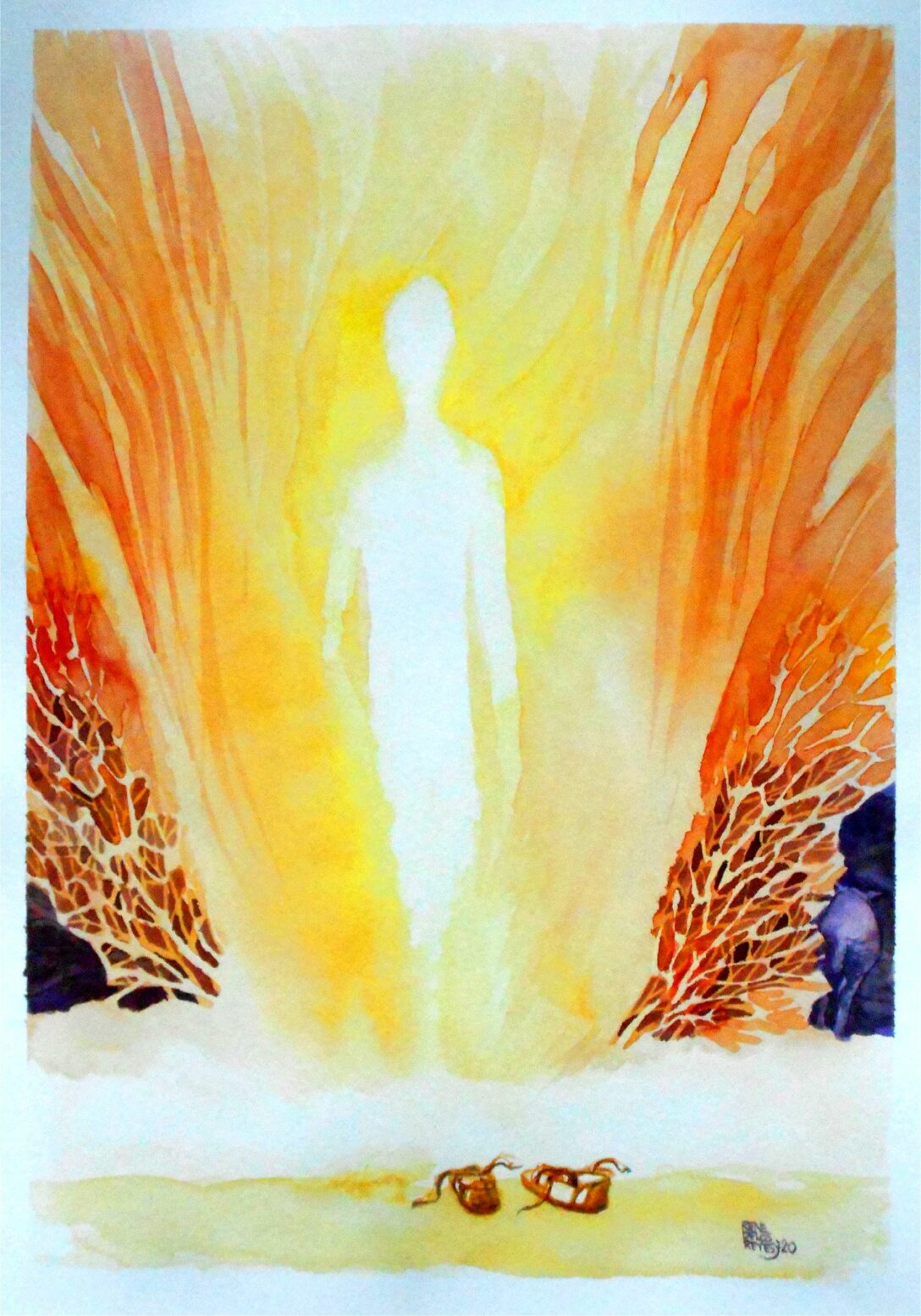 Today’s Picture: The Father and I are One – René de los Reyes

Jesus and the Father: Jesus reveals God to us

One of the optional phrases in the application of the Ashes done in churches today on Ash Wednesday is, “Repent and believe in the Gospel”. The word we translate as ‘repent’ – metanoia – means ‘change of heart’ or to live life with your belief in the Gospel at its centre. For Christians the person of Jesus Christ is central to the Good News of the Gospel.
In today’s reading, taken from the Last Supper talk to his disciples, Jesus claims that those who have seen him have effectively seen God the Father, because in seeing Jesus we see God. This is one of the core beliefs of the Christian community, that Jesus is the Revelation of God.

Stilling:  Throughout the retreat we suggest you begin your prayer with a stilling exercise.

Preparation: After the stilling,  dedicate the time of prayer to God and ask God that all you think, feel and imagine are for the glory of God.

Gift: Ask for what you desire. Suggestion: To know Jesus more clearly, love him more dearly, follow him more nearly.

Setting: Imagine you are listening to Jesus in a room with the Disciples.

Jesus told Thomas, “I am the way, the truth, and the life.
No one comes to the Father except through Me.
“If you know Me, you will also know My Father.
From now on you do know Him and have seen Him.”
“Lord,” said Philip, “show us the Father, and that’s enough for us.”
Jesus said to him,
“Have I been among you all this time without your knowing Me, Philip?
The one who has seen Me has seen the Father.
How can you say, ‘Show us the Father’?
Don’t you believe that I am in the Father and the Father is in Me?
The words I speak to you I do not speak on My own.
The Father who lives in Me does His works.
Believe Me that I am in the Father and the Father is in Me.
Otherwise, believe because of the works themselves.
“I assure you: The one who believes in Me will also do the works that I do.
And he will do even greater works than these, because I am going to the Father.

Conversation: Every day when you come close to the end of the prayer you are invited to have a conversation with Jesus.  Imagine yourself talking to Jesus as a friend; a familiar conversation talking about whatever concerns you.
How does Jesus reply?   God can speak through our imagination.  Often we seem to get unexpected and rapid replies.  If you suspect that a reply is just your imagination, ask yourself if Jesus of the Gospels is likely to have said such a thing.  Most often the answer is ‘yes’.

Final Prayer:  You may like to end your prayer each day with a formal prayer such as the Lord’s Prayer/Our Father.

The elements of our daily Prayer

Every day of this retreat we present the following elements in your prayer:

Preparation: You may begin your prayer time with a stilling or awareness exercise; then dedicate your time and thoughts to God.

Gift: We suggest a gift or grace to ask God for each day.

Setting: The story as given in the Scripture passage we take for the day’s prayer. Set the scene, live the story in your imagination.  It could be a reflection on the words of Scripture.

Conversation: Talking to Jesus Christ, the Father, Mary as one friend to another.  Talking naturally about whatever has come up in the prayer; also called a ‘colloquy’.

Final Prayer: The time of prayer is usually ended with a formal prayer such as the Lord’s Prayer/Our Father, Hail Mary etc.