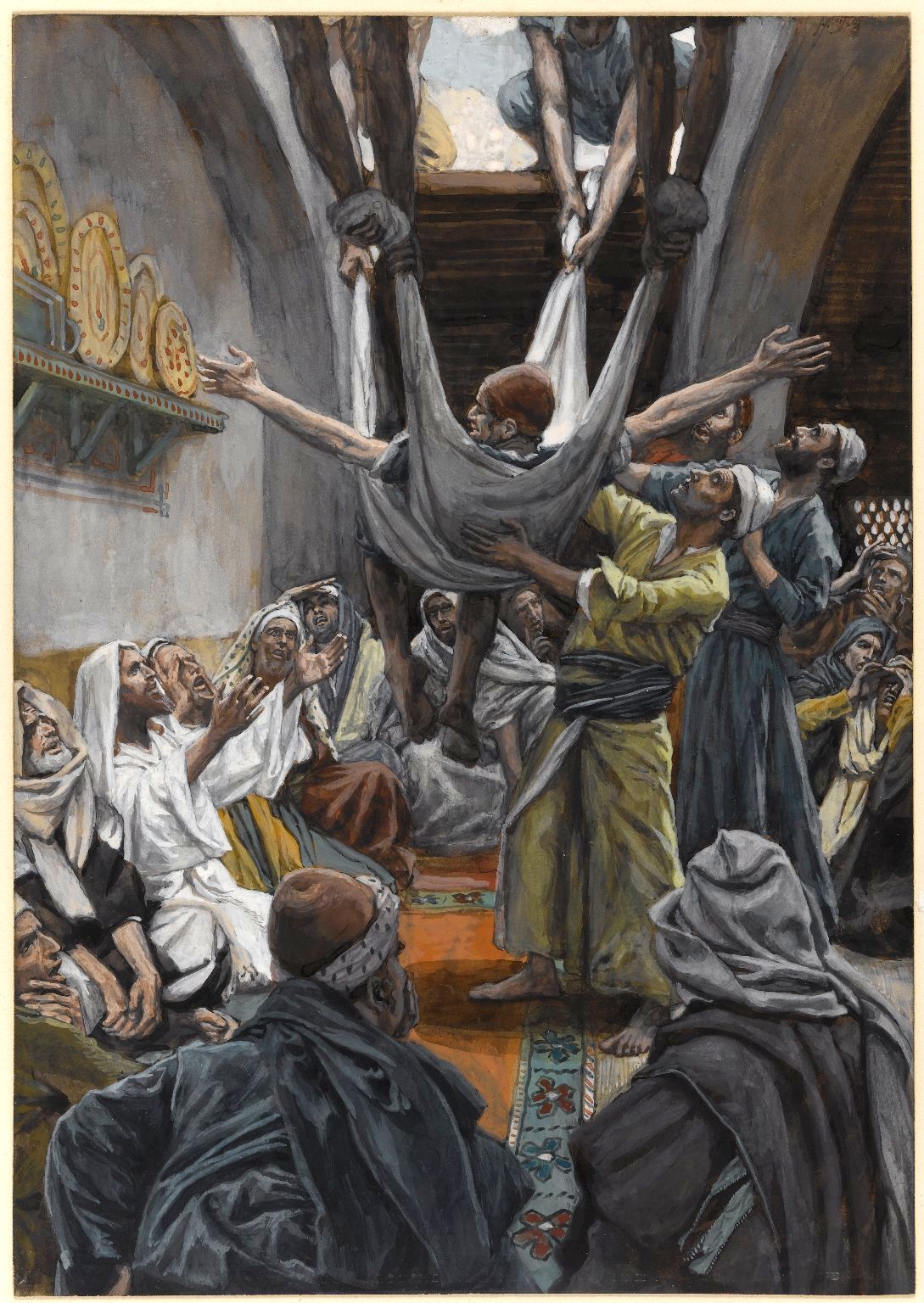 Today’s Picture: The Palsied Man Let Down through the Roof by James Tissot

Jesus reaches out to those in need: The Sinner

In the culture of Jesus, misfortunes like being paralysed were seen as God punishing you for sin; yours or your ancestors.
Here Jesus breaks that link.
First he tells the man his sins are forgiven,
but doesn’t cure him.
As Jesus says elsewhere, misfortune isn’t God’s punishment for sin.
God doesn’t interfere in the way the world works to reward or punish us.
Jesus’ God, is the God of healing and forgiveness.

Gift:  Ask for what you desire. Suggestion: That I may accept and feel forgiven.

Setting:  A story with many characters to choose from.

When Jesus entered Capernaum again after some days,
it was reported that He was at home.
So many people gathered together that there was no more room,
not even in the doorway, and He was speaking the message to them.
Then they came to Him bringing a paralytic, carried by four men.
Since they were not able to bring him to Jesus because of the crowd,
they removed the roof above where He was.
And when they had broken through,
they lowered the mat on which the paralytic was lying.
Seeing their faith, Jesus told the paralytic, “Son, your sins are forgiven.”
But some of the scribes were sitting there, thinking to themselves:
“Why does He speak like this?
He’s blaspheming! Who can forgive sins but God alone?”
Right away Jesus understood in His spirit that they were thinking like this within themselves and said to them, “Why are you thinking these things in your hearts?
Which is easier: to say to the paralytic, ‘Your sins are forgiven,’ or to say,
‘Get up, pick up your mat, and walk’?
But so you may know that the Son of Man has authority on earth to forgive sins,”
He told the paralytic, “I tell you: get up, pick up your mat, and go home.”
Immediately he got up, picked up the mat,
and went out in front of everyone.
As a result, they were all astounded and gave glory to God, saying,
“We have never seen anything like this!”

Conversation: Talk to Jesus in your own words as one friend to another.