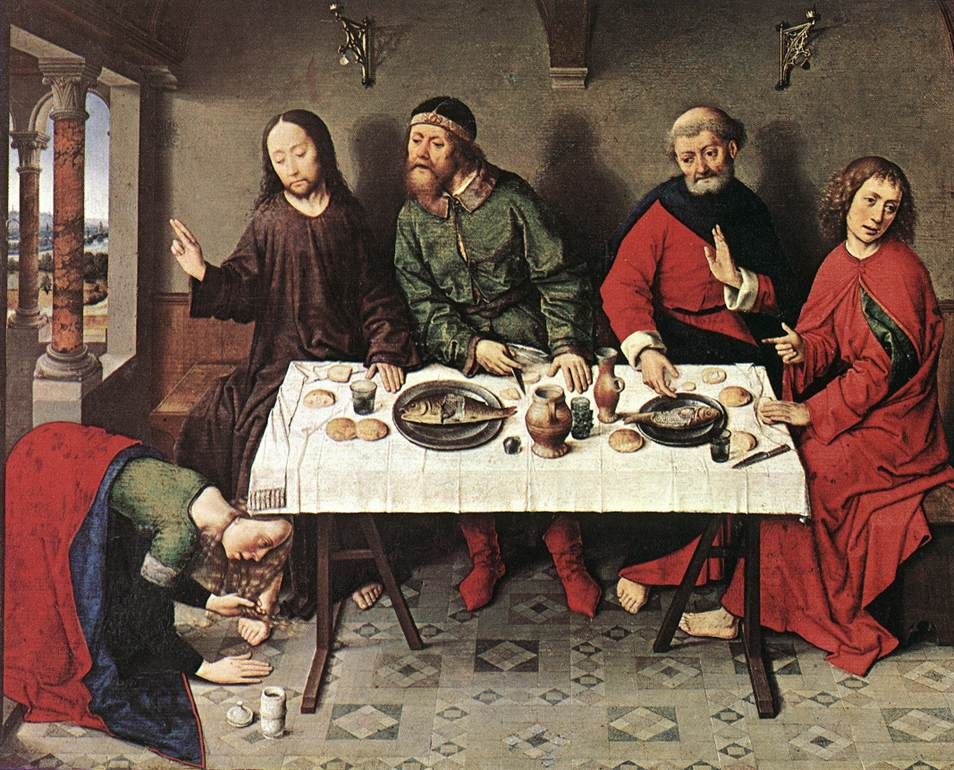 Today’s Picture: Jesus at house of Simon by Dieric Bouts

Again we have the respectable Pharisees criticising the woman with the ‘bad reputation’.
Why was her reputation bad?
We can only guess.
The Church fathers tended to suggest she was a prostitute, but that probably says more about the minds of the Church fathers than the women.
But when she realised she was accepted and her sins were forgiven,
she responded with a loving gesture.

Gift: Ask for what you desire. Suggestion: To be more open and forgiving.

Setting: Another good passage to imagine.

Jesus entered the Pharisee’s house and reclined at the table.
And a woman in the town who was a sinner found out that Jesus was reclining
at the table in the Pharisee’s house.
She brought an alabaster jar of fragrant oil and stood behind Him at His feet,
weeping, and began to wash His feet with her tears.
She wiped His feet with the hair of her head,
kissing them and anointing them with the fragrant oil.

When the Pharisee who had invited Him saw this, he said to himself,
“This man, if He were a prophet, would know who and what kind
of woman this is who is touching Him—she’s a sinner!”
Jesus replied to him, “Simon, I have something to say to you.”
“Teacher,” he said, “say it.”
“A creditor had two debtors. One owed 500 denarii, and the other  50.
Since they could not pay it back, he graciously forgave them both.
So, which of them will love him more?”
Simon answered, “I suppose the one he forgave more.”
“You have judged correctly,” He told him.
Turning to the woman,
He said to Simon, “Do you see this woman?
I entered your house; you gave Me no water for My feet,
but she, with her tears, has washed My feet and wiped them with her hair.
You gave Me no kiss, but she hasn’t stopped kissing My feet since I came in.
You didn’t anoint My head with olive oil,
but she has anointed My feet with fragrant oil.
Therefore I tell you, her many sins have been forgiven;
that’s why she loved much.
But the one who is forgiven little, loves little.”
Then He said to her, “Your sins are forgiven.”
Those who were at the table with Him began to say among themselves,
“Who is this man who even forgives sins?”

Conversation: Talk to Jesus and then finish with the Lord’s prayer.

Today’s Music: What can I Give to the Lord – written by Evan Shelton and sung by Sherri Beioley