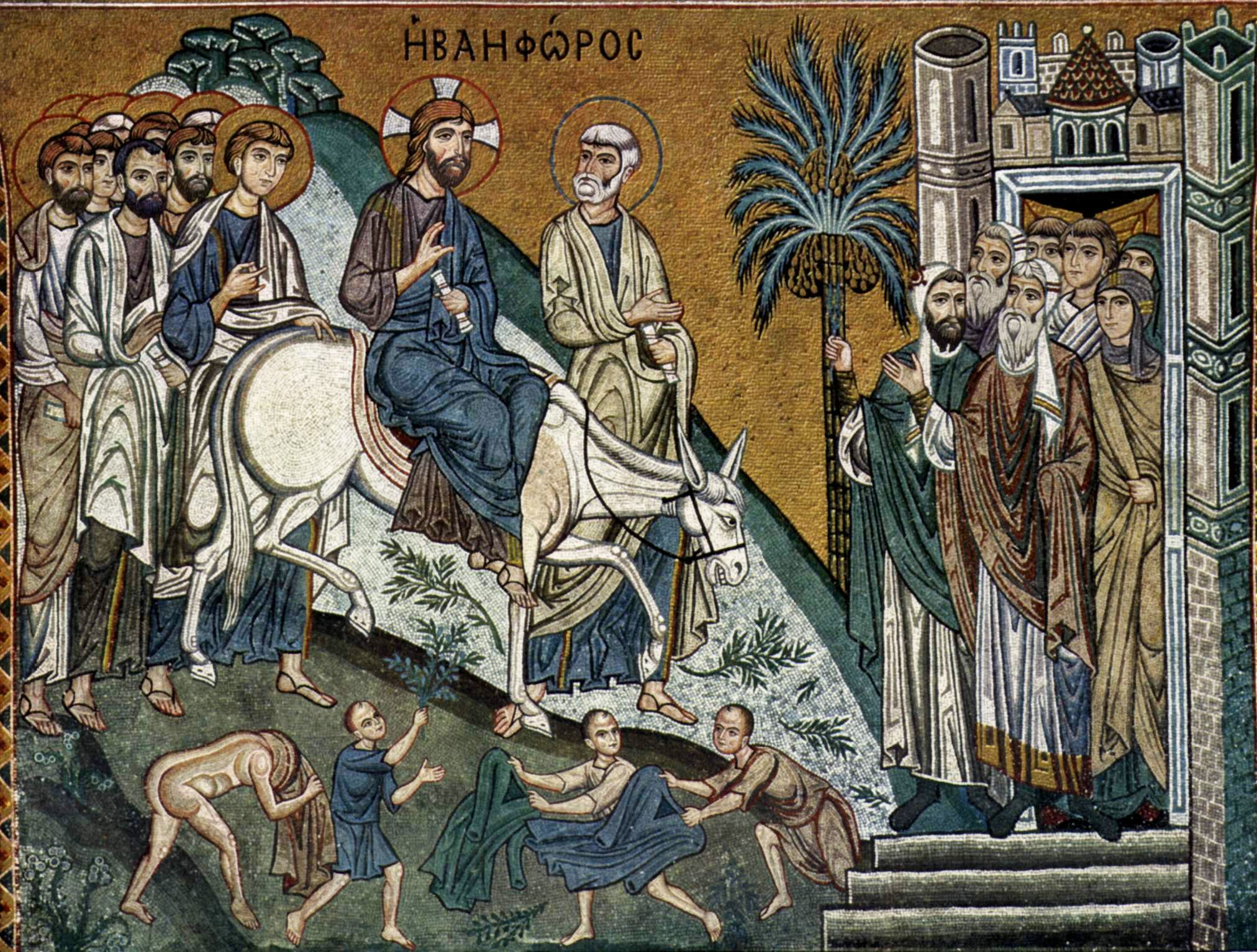 Palm Sunday, named after the tradition that upon Jesus’ entry into Jerusalem on a donkey the people carpeted his way with the leaves of palm trees and their clothes.
The popularity of Jesus frightened the religious authorities in Jerusalem.
The people acclaiming him ‘king’ would have frightened them even more.
He might lead a rebellion against the Romans and bring down the wrath of Rome on the city.
Though seemingly rather strange, arriving on a humble donkey, this was fulfilling a prophecy in Scriptures (Zechariah 9:9).

Gift:  Ask for what you desire. Suggestion: That you wish to accept Jesus as your king; to know him more clearly, love him more dearly and follow him more nearly.

Setting:  I imagine myself at the entrance to Jerusalem. Who am I?
See this event through the eyes of your character.
How do you imagine the others around you are reacting? How do you feel?

As Jesus approached Bethphage and Bethany, at the place called the Mount of Olives,
He sent two of the disciples and said, “Go into the village ahead of you.
As you enter it, you will find a young donkey tied there, on which no one has ever sat.
Untie it and bring it here.
If anyone asks you, ‘Why are you untying it?’ say this: ‘The Lord needs it.’”

So those who were sent left and found it just as He had told them.
As they were untying the young donkey, its owners said to them,
“Why are you untying the donkey?”
“The Lord needs it,” they said.
Then they brought it to Jesus, and after throwing their robes on the donkey,
they helped Jesus get on it.
As He was going along, they were spreading their robes on the road.
Now He came near the path down the Mount of Olives,
and the whole crowd of the disciples began to praise God joyfully with a loud voice for all the miracles they had seen:

The King who comes
in the name of the Lord
is the blessed One.
Peace in heaven
and glory in the highest heaven!

Some of the Pharisees from the crowd told Him, “Teacher, rebuke Your disciples.”
He answered, “I tell you, if they were to keep silent, the stones would cry out!”

Conversation: Talk to Jesus or one of those following along the way.
What might you want to say?
How do you imagine they might reply to you?