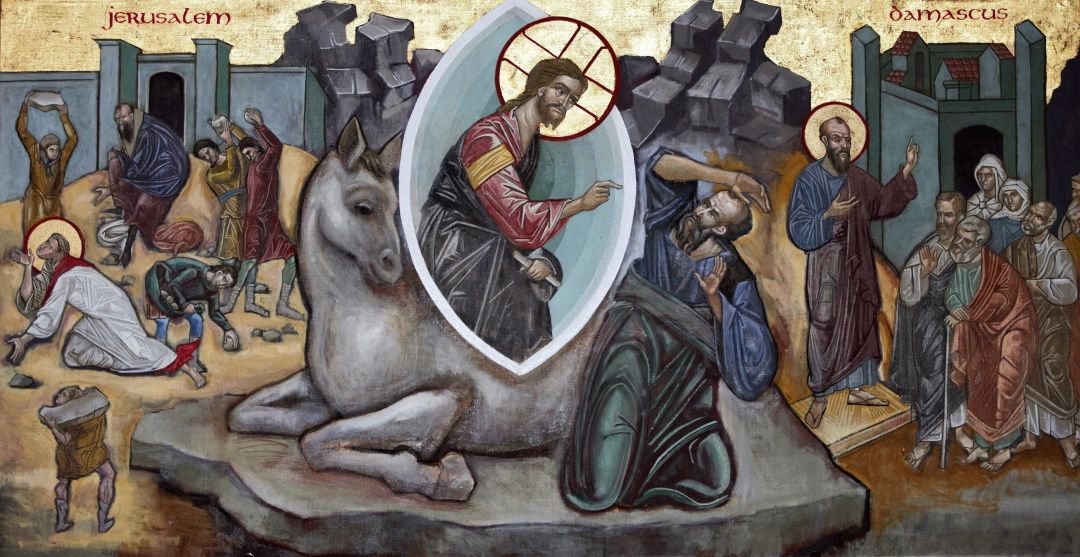 Today’s Picture: The Road to Damascus by Mike Quirke

Jesus comes to Paul, then known as Saul, in a vision –
more a sense of being talked to than seeing someone;
A challenge to Paul to change his allegiance.
His conversion was dramatic,
but it took a time before he was ready to go and preach about the Lord Jesus.

Although we might not have such a dramatic experience,
we too can dream, have visions, hear in our imagination.

Gift:  Ask for what you desire.
Suggestion: The same confidence in Jesus Christ that the Spirit gave Paul

Setting: You may like to imagine you are Paul, or one of his companions on the road.

Saul was still breathing threats and murder against the disciples of the Lord.
He went to the high priest and requested letters from him to the synagogues in Damascus,
so that if he found any men or women who belonged to the Way,
he might bring them as prisoners to Jerusalem.
As he travelled and was nearing Damascus,
a light from heaven suddenly flashed around him.
Falling to the ground, he heard a voice saying to him,
“Saul, Saul, why are you persecuting Me?”
“Who are You, Lord?” he said.
“I am Jesus, the One you are persecuting,” He replied.
“But get up and go into the city, and you will be told what you must do.”
The men who were travelling with him stood speechless,
hearing the sound but seeing no one.
Then Saul got up from the ground,
and though his eyes were open, he could see nothing.
So they took him by the hand and led him into Damascus.

Conversation: Talk to Jesus or Paul. What might you want to say?
How do you imagine they might reply to you?

As we near to the end of our retreat you may be looking for something to follow it up.
We have a few suggestions for you – just click the button below.